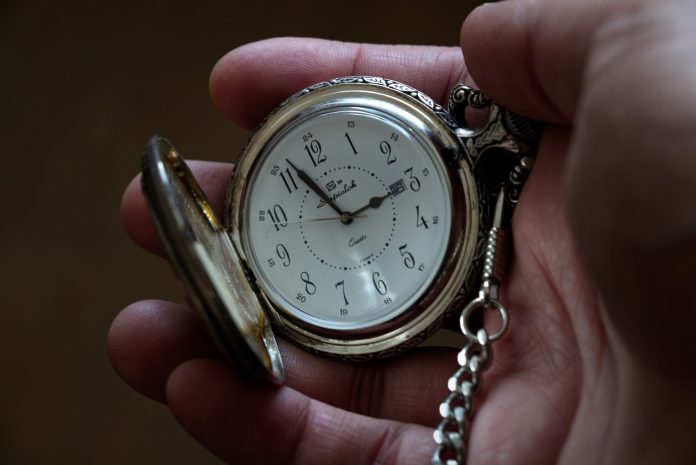 It’s fair to say that one of the catch-phrases of Army service, that new officers learn very early on at Sandhurst is: “and finally, ‘Time’ – synchronise watches.” This is worth more than a moment’s thought. It is, literally, the thing that we are trained, instinctively, to consider last. Perhaps, as we shall unpack a little below, it ought to be rather higher up our list of priorities.

Furthermore, though, we are taught that we should all defer to ‘Gunner Time’. There is, of course, good historical reason for this. One of the big early lessons from World War 1 experience was that if you don’t all have your watches set to the same time, exactly, as each other (and especially the time on the watch of the bloke giving the order to heave on the gun lanyard) then the walk behind a creeping barrage may do as much harm to you as it does to the enemy. Thus, obviously, time should be set to the same as ‘Gunner Time’ and therefore, as members of the Royal Regiment have tediously reminded me over the years, the Artillery is so important that it even owns time itself. Joking aside, though, there is an issue with this. Gunner Time is a fire-planned thing; a linear thing; a mechanical thing.

Training one’s mind to think in military terms of time as: a) our final consideration; and, b) a linear and mechanistic construct is very unhelpful in the endeavour to apply wit and mental agility to ensure that the enemy is not just out-fought, but also out-thought.

And it gets worse. Every recruit in Training, or officer cadet at Sandhurst, is taught to respect the absolute nature of time. The military culture expects people to be ‘on time’, and not just on time but to allow “ten minutes for the Sergeant Major” – so ‘on time’ means ahead of time ready for the given time in a very ordered and precise way. There is no flexibility. There is no room for doubt. A discussion with the said Sergeant Major, on the linear and absolute nature of time and its relationship with space, general relativity and quantum mechanics, in the event of one’s arrival on parade after whatever time it was that was perceived by him as the correct time, is unlikely to end well. So, we learn that time is specific, unnegotiable and exact.

In the two CHACR articles on this subject preceding this one you have been invited to reconsider time. Dr Meral whetted our appetite with thoughts on our own entrenched perceptions, vis-à-vis the perceptions of others, and urged us, in his words, to think of time as an area of conflict, a flank, a dimension, a domain, not just as a competitive edge or weakness in our well-established operationalisation of timing. Then Prof Strohn proffered examples from history, recent and more distant, in which the perceptions and the implications of time impacted upon life in general, and military operations in particular, in ways beyond a more linear concept of time and time-keeping.

So, break from the more traditional lines of thought for a moment and develop, instead, Dr Meral’s and Prof Strohn’s thoughts from the perspective of tactical and operational art. If we distil all of our efforts in these two spheres down to the most basic of levels, the job of the tactician or the operational artist is two-fold: to make as much sense as possible out of chaos (and be comfortable with it); and then to work out how to seize and hold the initiative within that chaos such that you can dictate the out-turn of events in your favour. And, in this sense, time takes on a whole new meaning that the pre-conditioned military mind must work through or get past.

Just a few elements of time that those seeking the initiative must think about are: timing, timespan, tempo and timeliness. In brief:

There is not space in this short article to explore these complex ideas further, but we hope that the short series of CHACR articles on the subject that have appeared this week have got you thinking. We will certainly be exploring this fascinating side to our profession in much more detail in the coming months. As the world of cyber and technology brings new meaning and compression to time and distance, and as competition with our strategic partners and opponents is re-recognised as a constant continuum as opposed to a finite set of stop-go activities, it is not good enough to leave thoughts about time until the synchronisation of watches at the end of an O Group. Time is not simple, exact, linear, absolute, unnegotiable and mechanistic (regardless of what the Sergeant Major or the Gunner might think). Any twenty-first century tactician or operational artist worth their salt must have time in all of its pliable, flexible, changing, negotiable and manageable forms front and centre of their estimates, their plans and their execution if they are to have any hope of achieving that acme of operational and tactical art: the seizing and holding of the initiative.