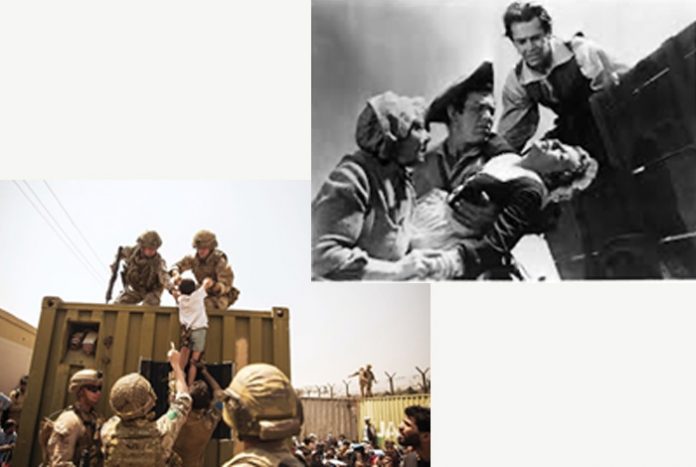 “It’s quiet…..too quiet” is now a cliché rolled out with monotonous regularity, having first, seemingly, seen the light of day in the John Ford Western classic of 1939 Drums Along The Mohawk. Reports of a degree of fragile and febrile calm settling over Kabul airport in the wake of Op PITTING, and the other international evacuation and Non-combatant Evacuation Operations (NEOs), are as numerous as reports of a return to systemic acts of repression and violence. It is perhaps therefore worth pausing to reflect upon that phrase.

Instinct, intuition, feeling, hunch: they are all very human emotions – indeed, the word emotion itself is inherently human. The men and women (and working dogs too) that deployed on Op PITTING will have had cause, repeatedly, to exercise a degree of all of those human (and animal) qualities during the two weeks of the operation. Military veterans, whether of the Normandy bocage, the streets of Northern Ireland, the jungles of Malaya or Vietnam, the streets of Basra, or the dust and poppy fields of Afghanistan all immediately understand references to that ‘sixth sense’ that one quickly develops in times of conflict or combat when, regardless of the data that presents itself to a brain that is firing on all cylinders, the hairs lift on the back of the neck and the forearms, or something, just something, tells you to hang on a moment and take a second look.

Much has been made over the last few years of the potential for technology to replace mass, for AI to replace human analysts and for the complexity of warfare to be increasingly handed over from people to machines. It seems to me that regardless of where one stands in that debate (from messianic convert to deep sceptic) the assertion that technology and informational advances will have significant impact on warfare holds water – these advances can, and no doubt will, make all kinds of dramatic changes to the ever-evolving character of war and warfare. And any self-respecting technologically-advanced nation will do all that it can to leverage this technological and informational (r)evolution to best effect – both in terms of the saving of human life and usage, and in the delivery-end effectiveness of modern technology.

But AI has not yet managed to develop the ability to dismiss the data, to set aside the hard evidence, in the same way that humans can, and to rely upon a feeling that all is not as it seems. In the 1939 film, the defenders of Fort Herkimer who feel that it is too quiet (and they are right, as, despite the evidence to the contrary, the Mohawk Indians are closing in for their final attack) are dismissing the data and relying upon human intuition to prepare themselves for the impending onslaught. Machines, regardless of how intelligent their AI is, work on logic. Certainly, machines can make seemingly illogical short-term sacrifices only later to reveal that those sacrifices were made for long-term advantage, but they do not, and so far cannot, do this as a result of emotions. Even those machines that can pass the ‘Turing Test’ do so by applying a complex logic chain to allow them to seem to be human – even though they may make a good job of appearing to have feelings, so far they have not been able to demonstrate a genuine ability to feel. Machines can analyse data and recommend actions, or, indeed, execute actions, because the data shows the conditions to be perfect for such an action to be taken. Humans can look at exactly the same data and instinctively apply the ‘too good to be true’ rule before taking any further steps!

So, we are told, the answer is to make sure that there is a human in the loop. I agree that that helps. But, as we embrace the march of technology (and we surely must), then we would do well not to embrace it so tightly that we become too deeply imbued with a mechanical Stockholm syndrome such that we allow data to triumph over intuition. One only has to look at the recent extraordinary conviction of a string of innocent postmasters to become uneasy about the dangers of authority embracing data over common sense.

Any conversation with the men and women of 16 Air Assault Brigade is bound to be filled with very human emotions. There’s bound to be plenty of human frailty there – exhaustion, fear, confusion, anxiety, exasperation, temper, sadness and so on – frailty from which machines would not suffer. But there will be plenty of human qualities there too – courage, compassion, instinct, empathy, sympathy, and yes, even humour. The management, reassurance and effective supervision of a crowd of worried humans can only be managed by other humans.

So NEOs need people to conduct them. Sure, they also need airframes and/or ships and all sorts of other capabilities too, but at the point of contact between frightened, exhausted and bewildered people and the path to safety there is, it seems to me, always going to need to be a strong, resolute, compassionate and professional human. And one thing is for certain, regardless of the march of technology, governments and populations (those two thirds of the Clausewitzian trinity that decide upon the use and composition of their military) will continue to expect, or rather demand, that their Armed Forces, and their Army in particular, has got enough good people to go anywhere in the world, regardless of the circumstances, and bring their own citizens out of harm’s way and into safety. And, increasingly, there is also an expectation that we should be able to provide the same care to those to whom we owe a debt of gratitude, or simply a share of human compassion.

Thus my first instinct, before one starts down the complex path of examining strategic outcomes (and a glance at the recently published CHACR book Winning Wars may give those conducting such analysis a head-start in the matter), is to be reminded by Op PITTING that armies need people. Regardless of the march of technology, over the years, high-quality, well-trained, decent, courageous, robust and compassionate professional men and women have been a particular commodity that the British Army has excelled at developing and delivering. Men and women whose training, experience and very human intuition also give them the ability to look at all of the evidence and say “it’s quiet ….. too quiet”. As we look at technologically enabled options for force development we would do well not to lose sight of that vital strength.