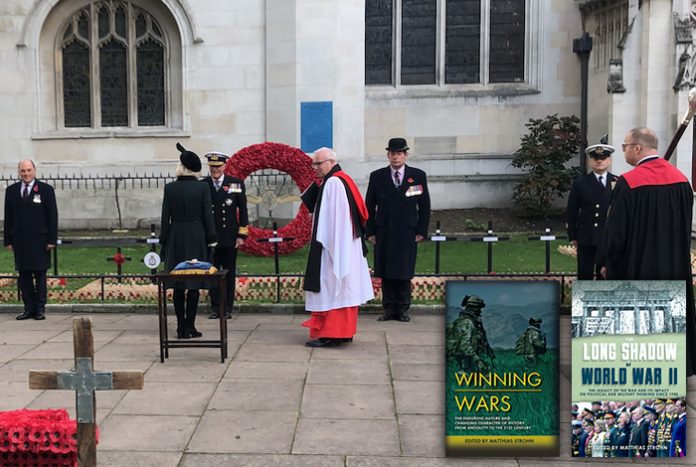 I recently attended a dinner in the City of London to commemorate the battle of Agincourt. It is an annual event that took place this year in a magnificent Livery Hall, appropriately enough surrounded by suits of armour and ancient weapons of war. After the usual light-hearted speeches and an inevitable dose of Shakespeare’s Henry V, the principal guest stood up to speak. He was a past Chief of Defence Intelligence. He had been invited by his host to provide the assembled audience with an insight into the realities of the threats and challenges that faced the UK. Without remotely betraying any state secrets of any kind he talked for about fifteen minutes, providing a clear, insightful and informative overview of the whole range of issues that needed our realistic attention: China and Russia, of course, and domestic terrorism too, but also the entire world of cyber (be it state-sponsored, irresponsible corporate behaviour, or malign ‘digital natives’ at home or abroad threatening us for a whole range of motives from criminal gain to personal entertainment), and the whole area of misinformation, disinformation and information manipulation for all sorts of malign ends. And he finished by saying that, despite the distractions of normal life and politics, and the distractions of the abnormal life that COVID had brought, it was a national responsibility to make sure that we were not deflected from the need properly to resource those who countered these threats – whether in the Armed Forces or the Security Services – with sufficient conventional equipment and force structures, the requisite numbers of the right people, and a whole new world of cyber and digital assets. Ignoring all of this was as irresponsible as ignoring climate change. There was nothing in what he had to say, I felt, that should have come as a surprise to any reasonably well-read and well-informed person who took even the most casual of interests in national security and strategy. In short, nothing that he said should have made me leave the dinner with a feeling of disquiet.

But it was the reaction to his words that did, indeed, leave me with just such a feeling. Those at the dinner were an eclectic group of about 70 people. Aged, broadly speaking, from their 50s to their 80s, they were comprised of intelligent, successful, well-informed and public-spirited folk. They were a cross-section of the sort of men and women that one would view as the wise contributors to society. And yet their post-dinner conversation was filled with troubled concern. I was approached and asked by several individuals questions along the lines of: “that was very surprising and disturbing. As an ex-military man yourself, do you agree with that rather bleak assessment by the principal guest?” These questions reflected the worried conversations across the Hall as the final glasses of port were sipped and the diners gathered their coats to head off to trains, homes or Clubs variously. So it was not what the ex-CDI had said that bothered me, but the fact that what he had said appeared to be news to such a well-informed gathering. The subsequent conversations revealed that the threats and risks that he described were perhaps not really news to the dinner guests, but were rather considered to be ‘background noise to real life’. They were problems that ‘someone else was dealing with’ …. and therefore not problems at all really. In short, I left the hall feeling bemused that even the most responsible and well-informed members of the ‘Great British Public’ simply were not engaged with, nor in possession of an understanding of, matters that concern Defence or Security. Such things are seemingly no longer part of ‘normal life’.

As I reflected upon this I was reminded of a conversation in which I was involved, a month or so ago, in Leicester, with a wonderfully engaging group of citizens gathered from a cross-section of the religious groups that comprise the extraordinarily varied and diverse community of that city. Among the group was a gentle and thoughtful lady who was a Quaker. During the conversation (with a small group of very senior Army officers present) the lady observed that she knew little or nothing of the Army, but was quite sure that violence, regardless of the motivations that underpinned it, was never the right answer to human problems. I answered by saying that she would be surprised how many men and women who had served in conflict zones would agree with her, but that, sadly, there were all sorts of actors out in the world who did not. And I’m afraid that I trotted out that great George Orwell quote that I used in my Remembrance commentary piece last November: “you may sleep peacefully in your bed tonight because rough men stand ready in the darkness to visit violence upon those who would do you harm”. I said that though our views may differ I would be prepared to fight to the death for her right to hold whatever views she wished. After the meeting she came over to me, quietly shook my hand and said “I’d never really thought about it like that before. No-one has ever talked about military things in a way that made them sound personal to me. Thank you.” And off she went into the bustling and uniquely multi-personality-multi-cultural streets of Leicester.

With those two anecdotes in mind, two recently published CHACR books, Winning Wars  and The Long Shadow of World War II are perhaps worth revisiting, together, as we approach our annual period of reflection and Remembrance. Winning Wars concludes with the statement: ‘Winning in war is the job of those who conduct wars. Winning from war is the job of those involved in statecraft who made the decision to use war to serve their ends’. In The Long Shadow of World War II we explored the lasting effects of the outcome of the wars of the first half of the Twentieth Century and concluded, perhaps unsurprisingly, but, if you read the book, in ways that may yet surprise you, that those outcomes continue to shape and influence the circumstances in which we live, and in which our leaders conduct statecraft on our behalf. The contents of both of those books would have been considered to be part of the mainstream of public dialogue in 1921 a hundred years ago, or even fifty years ago in 1971, as military service and an interest in security and military matters remained very much part of the normal public discourse. War service or National Service had shaped the lives of the majority of the adult population. The British public knew (and cared about) the difference between a brigadier and a bombardier.

I suspect that, as Remembrance Sunday approaches and as we watch the march-past of the Cenotaph in Whitehall, or stand in our cathedrals or village churches, or at our local war memorials, various commentators, be they on the television on a national scale or our local clergy on a more intimate scale, will observe that the loss of life in war is, above all else, about sacrifice for the common good. For much of the history of Remembrance Sunday the ‘common good’ resulting from the remembered scarifies has been a given. It has been considered to be self-evident and questioned only by a few. In as much as Defence and security matters are currently part of the public discourse at all, the war aims of the Iraq campaign and recent events in Afghanistan have, however, caused reflection and public debate, and, indeed, introspection by those who served in those campaigns. As the generation that fought in those two cataclysmic World Wars of the last century passes on (and the Duke of Edinburgh’s passing reminded us all that there are precious few of such servicemen and women left among us), national Remembrance will not (must not) forget them; but it is inevitably likely to focus more and more upon the conflicts that are represented by those who continue to march through Whitehall on Remembrance Sunday: Malaya, Borneo, Aden, Oman, Northern Ireland, The Falklands, Bosnia, Kosovo, Iraq, Afghanistan and many others. In all of these cases, alongside a modern tendency to doubt, to interrogate and to question, the concept of sacrifice through military service for the common good may well be treated increasingly differently. And this different treatment is likely to be affected by the ever-smaller proportion of the population who have any experience or understanding of military service. Informed commentators have often observed recently that the military has rarely been so well respected, yet so little understood. And soldiers will tell you that they feel increasingly uneasy about a tendency for the public to treat them as ‘victims’ as a result of their choice to serve.

Against this background, two things will continue to matter and should continue to hold our attention on Remembrance Day. First is the selflessness of those who have given themselves to serve the interests of those who they have left behind. For them, we must pause in remembrance and gratefulness. Second is to pause in sober reflection on the purpose of such sacrifice. George Orwell’s rough men and women continue to serve on, watching our backs as we sleep – either literally or metaphorically – and as we dream or think upon matters far from Defence and security. I think that that great quote continues to serve well and to bear weight and meaning today: at base, that sentiment sits at the core of why so many men and women continue to serve in the Armed Forces. But it is equally important to make sure that the people of the nation upon who’s behalf those men and women stand ready in the darkness take part in an enlightened, balanced, well-informed and meaningful discussion about the nature and purpose of that military service. We must not let the understanding of security become increasingly little-understood background noise.

So, I would simply conclude by observing that those of you reading this who are responsible for winning in wars, that is to say who have served or who continue to serve, from Malaya to Mali, can rightly conclude that you have done your bit with great credit, and that those who lost their lives by your sides did so in the best of ways, among the best of people, for the best of reasons. And they deserve remembering, with respect and gratefulness, for that sacrifice. Alongside that we all, together, need to do our best to inform, assure and articulate the purpose of such service. We need to keep Remembering, and we need to make sure that we keep everyone remembering what we are Remembering for.