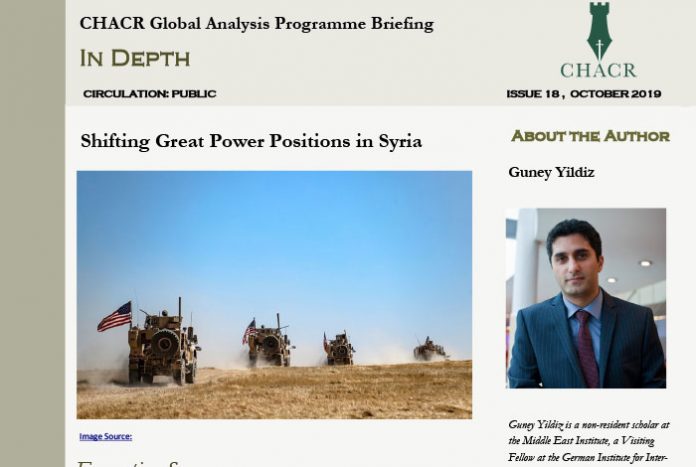 The Turkish offensive against Kurdish-led administrations in northeast Syria resulted in Russia to emerge as the real power broker. Once the US was out of the equation in Syria following President Trump’s decision to pull out, Moscow acted fast not only to secure an agreement between the Syrian Kurds and the regime but also between the Syrian regime and Turkey. Kurds coming to terms with the Assad government will be a massive boost to the regime’s outlook. Despite the widespread criticism of the Turkish invasion of Syria, by several European leaders, US Senators, policymakers, the media and the celebrities, the reac-tions yet produced little in the form of severe concrete sanctions. But Turkey is facing pressure to stop its offensive not only from the West but also from Russia and Iran. With the potential de-mise of the Kurdish-led decentralisation project in Syria, Turkey would benefit highly in strategic political terms. However, this could increase medium level security risks in Turkey as the PKK-linked members of the Syrian Kurds could choose to cross bor-ders to focus on their armed campaign against the Turkish gov-ernment, their ultimate enemy.

Today’s visitor to the Western Front sees a landscape that has been permanently changed by the fighting of the First World War. The signs...
Read more

"It’s quiet…..too quiet" is now a cliché rolled out with monotonous regularity, having first, seemingly, seen the light of day in the John Ford...
Read more

Climate Change and Defence: Are we ready for its impact? Dr Ziya Meral, CHACR

This article was originally published by Wavell Room. When reflecting on climate change from the perspective of those who compose defence policy there are...
Read more