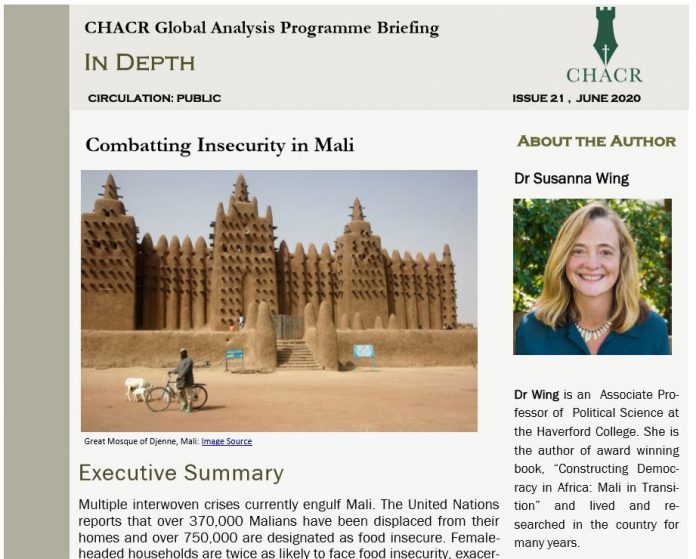 Our latest In Depth Briefing is by Dr Susanna Wing (author of ‘Constructing Democracy in Africa: Mali in Transition’) which explores the background of the current issues in Mali, and takes a look at the long road ahead for the country and international community.

Executive Summary
Multiple interwoven crises currently engulf Mali. The United Nations reports that over 370,000 Malians have been displaced from their homes and over 750,000 are designated as food insecure. Female headed households are twice as likely to face food insecurity, exacerbating gender inequalities. Poverty is on the rise. Unemployment and shuttered schools have left youth with few opportunities to improve their futures. Frustration with political leadership and local conditions make youth susceptible to recruitment by extremist groups that target state outposts and personnel while fomenting intercommunal violence. International actors should focus on supporting efforts to improve government transparency and accountability. Widespread impunity has led to very little confidence in the institutions of government and the country’s political leadership. Governance structures are weak and critics have called for President Ibrahim Boubacar Keita’s resignation. More civilians died in Mali in 2019 than in any year since the 2012 coup d’état. Domestic leadership and international intervention, alongside cooperation of the G5 Sahel Joint Force (including Mauritania, Mali, Niger, Chad and Burkina Faso), have failed to stop the spread of insecurity. The result is a fragile and volatile environment. Military force cannot succeed without coordinated development and governance support that will get at the heart of the ongoing crises.